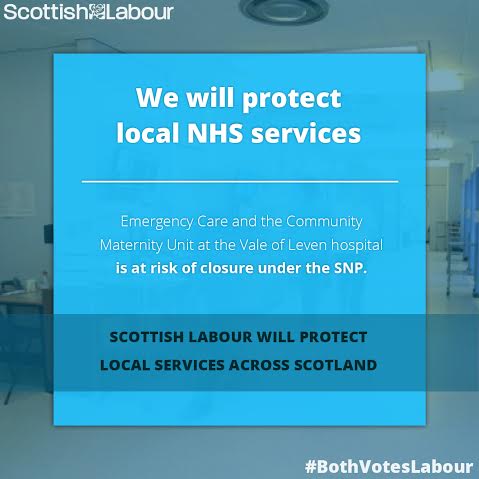 Jackie Baillie has today welcomed Scottish Labour’s strong commitment to protecting and improving services at the Vale of Leven Hospital.

Scottish Labour’s manifesto published today has pledged to maintain the Vale of Leven Hospital’s emergency care and maternity services, which are earmarked for closure under secret health board plans due for discussion one month after the election.

This means that Scottish Labour is now the only party to offer a cast-iron guarantee to stop the cuts and protect all services at our local hospital. The SNP has refused to give a straight answer on what the future holds for emergency care and the maternity unit. Indeed, there is no mention of the Vale of Leven Hospital in the SNP manifesto.

NHS Greater Glasgow and Clyde is already working on proposals to cut services and staff numbers at a number of hospitals in the west of Scotland, including the Vale, in a bid to save £69 million. This is in addition to the recent closure of Ward 6 and the removal of the blood pressure clinic from the Vale of Leven Hospital at the end of last year.

“Scottish Labour’s policy on the Vale of Leven Hospital is very clear. We will oppose cuts to staff and services and reject the health board’s plans to remove emergency care and the maternity unit.

“The right thing to do before an election is to publish your policies so that local people know where each candidate stands on important issues. That’s exactly what Labour has done and I’m proud to say that I am standing on a platform of no cuts to local health services.

“Meanwhile the health board and the SNP Government are working together to keep local people in the dark over the cuts coming to the Vale of Leven Hospital. Officials will discuss plans to cut vital local services just one month after people cast their votes at the election. I believe that local people deserve better than this.

“The reality is that the SNP won’t match Labour’s cast-iron guarantee to protect all current services at the Vale. The fact that the SNP doesn’t even mention Vale of Leven Hospital once in their manifesto, while the local candidate has remained silent on the closure of ward 6, tells you all you need to know about the SNP’s plans for the Vale.”