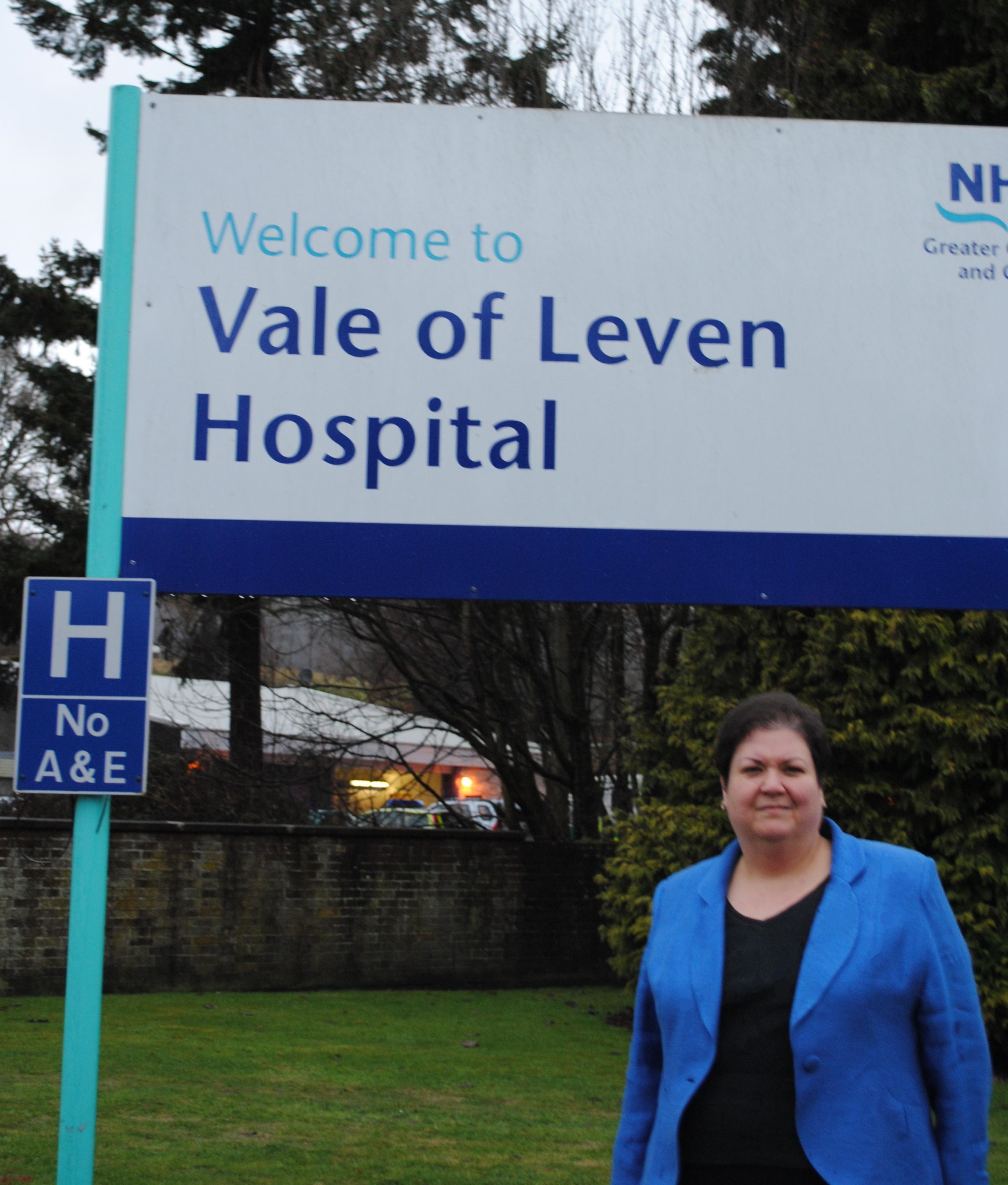 Local MSP Jackie Baillie has slammed the Scottish Government’s refusal to consider a return of north of the river A&E services following a meeting with the Health Secretary Shona Robison at the Vale of Leven Hospital yesterday.

The SNP Health Secretary repeated her opposition to plans to establish an A&E department at the Golden Jubilee in Dalmuir or at the Vale of Leven Hospital during a meeting with cross-party activists and local health campaigners in Alexandria.

Shona Robison told the group that she would look at ways to increase the number of patients attending services at the Vale of Leven Hospital but refused to consider an A&E department.

“Our local community has pulled together to campaign for north of the river health services so it is bitterly disappointing that Shona Robison has dismissed all of our options for a new A&E department to serve people in West Dunbartonshire, Helensburgh and Lomond. The opening of the new hospital in the south of Glasgow and the closure of the Western Infirmary leaves a huge gap in provision for patients in the north west of Glasgow and West Dunbartonshire.

“The staff at the RAH in Paisley do an excellent job but with the constant pressure on hospital services and missed waiting time targets the case for A&E at the Vale or the Golden Jubilee could not be stronger. The previous Health Secretary, Alex Neil, supported our campaign and invited NHS Greater Glasgow & Clyde to submit a proposal for North of the River A&E, but the new Health Secretary has set her face against local people. Why has the government changed it’s mind?”

“Our campaign group has said since day one that we will fight for A&E at the Vale but we would also be happy to see A&E services introduced anywhere north of the river. That’s why it is so disappointing that the Cabinet Secretary confirmed that A&E at the Golden Jubilee is firmly off the table and promised nothing for the Vale.

“We also spent a great deal of time talking about the lack of availability of ambulances in our area and reports of patients waiting up to 50 minutes for emergency services to arrive after having a stroke. We discussed the same issues at length during our previous meeting with the Cabinet Secretary three months ago and it is disappointing that no progress appears to have been made yet”.

“It felt as though the meeting was a mere box-ticking exercise for the Cabinet Secretary and our demands for A&E have simply fallen on deaf ears. Local people hate travelling to the RAH in Paisley and the worrying reports of some patients being discharged in the middle of night with no car or public transport available to take them back to West Dunbartonshire or Helensburgh and Lomond do not help. For too long our area has been treated like a forgotten backwater and it’s time we get the services we deserve.”

Pauline MacLean, the Manager at Millig Practice in Helensburgh, said:

“I have become increasingly concerned about the time we are waiting for blue light ambulances that we request as they can take 40 to 50 minutes to arrive.  Our nearest A&E is RAH in Paisley as the Vale of Leven Hosptial no longer has an A&E Department.  Travelling time is now dramatically increased with both these changes in service.

“I advised the Cabinet Secretary of six instances recently when we waiting 40-50 minutes for suspected heart attacks and strokes.  Early treatment for these patients is paramount and I feel we need new protocols for these serious medical conditions.  For example a stroke patient that receives treatment within 4 hours will experience a much better outcome and I believe due to the lack of ambulance service this is not always the case.

“Ambulance crew’s welfare is also a concern as due to no fault of their own they can arrive too late to help some patients which is very difficult when you have always trained to safe lives. They are then sent out straight away to another call with no time to reflect. What are we doing to help?  They are also having to work on rest days and cancel holidays to cover shifts and I believe some weekends can see up to 4 shifts uncovered just a couple of days before