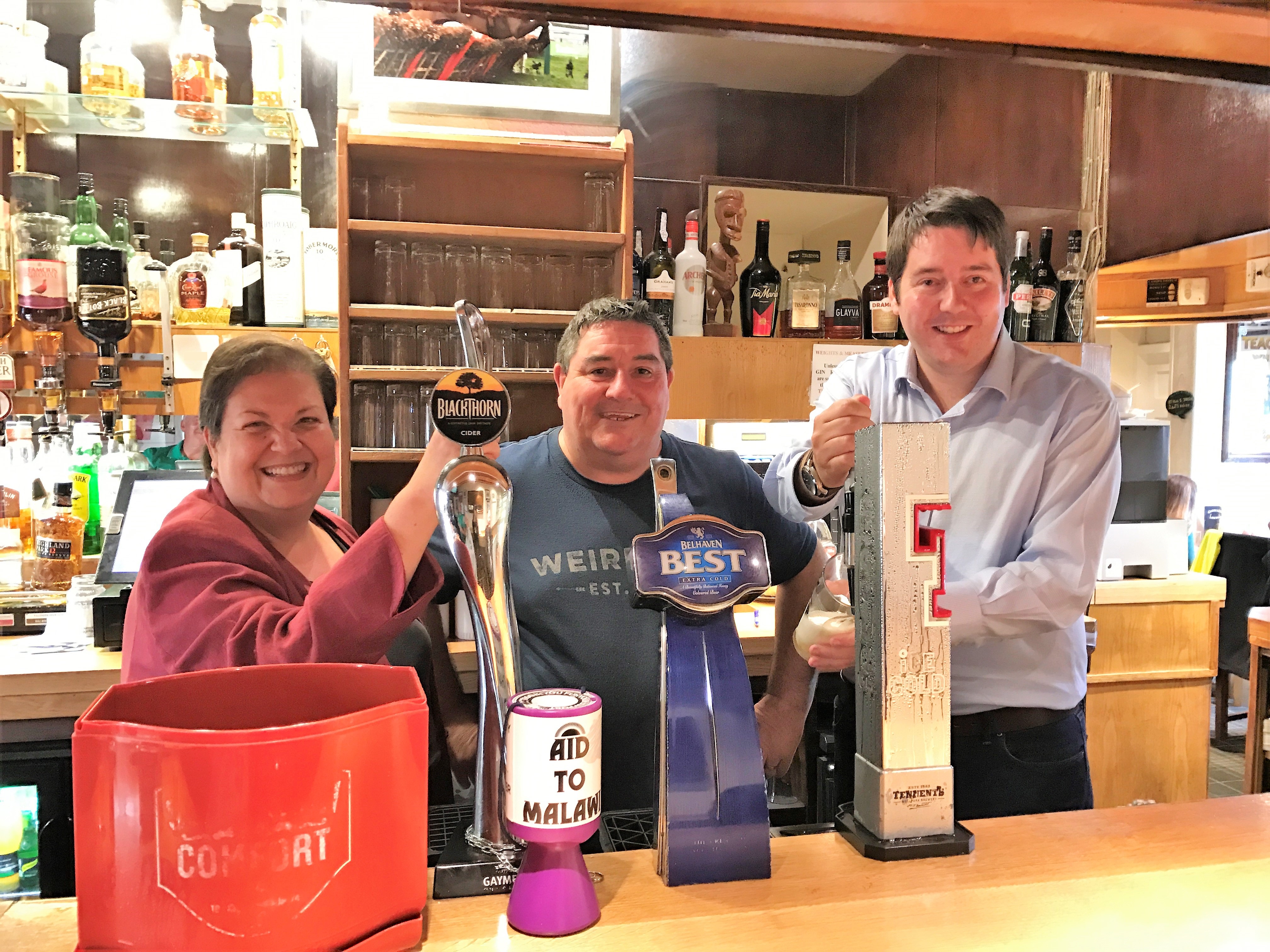 Over 90 per cent of responses to a consultation supported by local MSP Jackie Baillie on a proposed Tied Pubs Bill have backed a change in the law.

Labour MSP Neil Bibby visited a pub in Dumbarton with Jackie Baillie during the consultation to drum up support for the proposal. Local licensee Tommy Murray invited the pair to The Glencairn to discuss the potential benefits, including protecting jobs and more choice and lower prices for pubgoers.

The proposal formally lodged this week would create a statutory Pubs Code to regulate the relationship between tied pub tenants and their pub-owning landlords and an independent Adjudicator to enforce the code. Tied pub tenants in Scotland would gain similar rights to those in England and Wales, with restrictions eased on the range of drinks they can stock.

93 per cent of consultation respondents supported the Bill, including 87 per cent who described themselves as ‘fully supportive’.

The Bill is backed by a broad coalition including the Scottish Licensed Trade Association(SLTA), the Campaign for Real Ale (CAMRA), GMB Scotland, the STUC and the Federation of Small Businesses (FSB).

“This is a ringing endorsement for Neil Bibby’s plan to call time on the unfair practices of big business pubcos and I have supported his bill from the outset.

“Times are tough for many small businesses and the pub sector has seen more than its fair share of closures and job losses in recent years. This new proposal would allow pub tenants to opt out of their tied arrangements if they wish, giving the industry a real boost. It would also give local publicans the flexibility they need to react to changes affecting their business as well as offering better choice and cheaper prices for customers.”

“This proposal is about fairness, choice and jobs. Fairness for tied pub tenants, choice for Scotland’s pub goers and jobs in the pub and brewing industries. My Bill would reset the relationship between tied licensees and their landlords, giving tied tenants in Scotland similar rights to those in England and Wales, and it would make it easier to bring locally-brewed products into the tied pub sector.

“Too often tied deals are one-sided and uncompetitive. With a broad coalition behind the Bill and backing from an overwhelming 93 per cent who responded, this consultation has demonstrated very clearly that the sector has to change.

“I have now formally lodged my proposal and I am asking MSPs of all parties to work with me to deliver a much-needed change in the law and a fairer deal for Scotland’s tied pubs and the brewing industry.”

In a statement, licensed trade body, the SLTA said:

“The SLTA echoes the support of the majority of respondents to the tied house consultation who are calling for a statutory Pubs Code and Adjudicator in Scotland to give Scottish tied house tenants the same protection as their counterparts in England and Wales. The status quo is not an option and our message remains the same -; ‘there is an urgent need to have parity with the rest of the UK’. It is totally unacceptable for Scotland’s tenant licensees to be left in the very vulnerable position they find themselves in.

“Tied pub reform will end the discriminatory, unfair and uncompetitive marketplace that tied house tenants are locked into and will reverse the serious negative effect on the economy, particularly local economies.”

“CAMRA welcomes the consultation results which show that an overwhelming 93% of respondents agree with CAMRA that change is needed to protect Scottish licensees tied to the large pub companies.

“Many pubs in Scotland are struggling because pub companies take more than is fair or sustainable from tied licensees’ profits by forcing them to buy their beer directly from them at inflated prices rather than on the open market. Licensees are further hit by paying above market value for rents and consequentially struggling to make a living, contributing to pub closures across Scotland.

“We therefore fully support Neil Bibby’s Pubs Code Bill, which calls for a powerful pubs code to govern the relationship between pub companies and their tenants to ensure licensees are treated fairly.”

“Neil Bibby’s consultation on tied pub reform has demonstrated the strength of feeling and the breadth of the coalition in favour of change.  The Scottish Government should now move quickly to support legislative proposals which can deliver fairness for tied pubs tenants, give more choice for punters and help create a more level playing field for Scottish brewers who, as they should know, are significant employers.

“GMB Scotland members working in the Scottish brewing industry certainly understand that a fairer tied pubs market will help to sustain good jobs in their industry.  MSPs, of all parties, should be in no doubt that tied pub tenants and brewing industry workers alike support these proposals and now want to see change delivered.”

Colin Borland, Head of Devolved Nations at the FSB said;

“Neil Bibby’s proposed Bill will give the pub industry the New Year boost it needs by giving small businesses the opportunity to be free-of-tie -; meaning lower prices and more choice for customers and greater take-home pay for tied tenants.

“FSB is calling on the Scottish Government to back local pub owners, get behind the Bill and call time on ineffective industry self-regulation