Dumbarton MSP Jackie Baillie will use a Members’ Business debate in the Scottish Parliament today to call on the SNP Government to block proposals to cut local health services across the Greater Glasgow and Clyde health board area, including at the Vale of Leven Hospital. 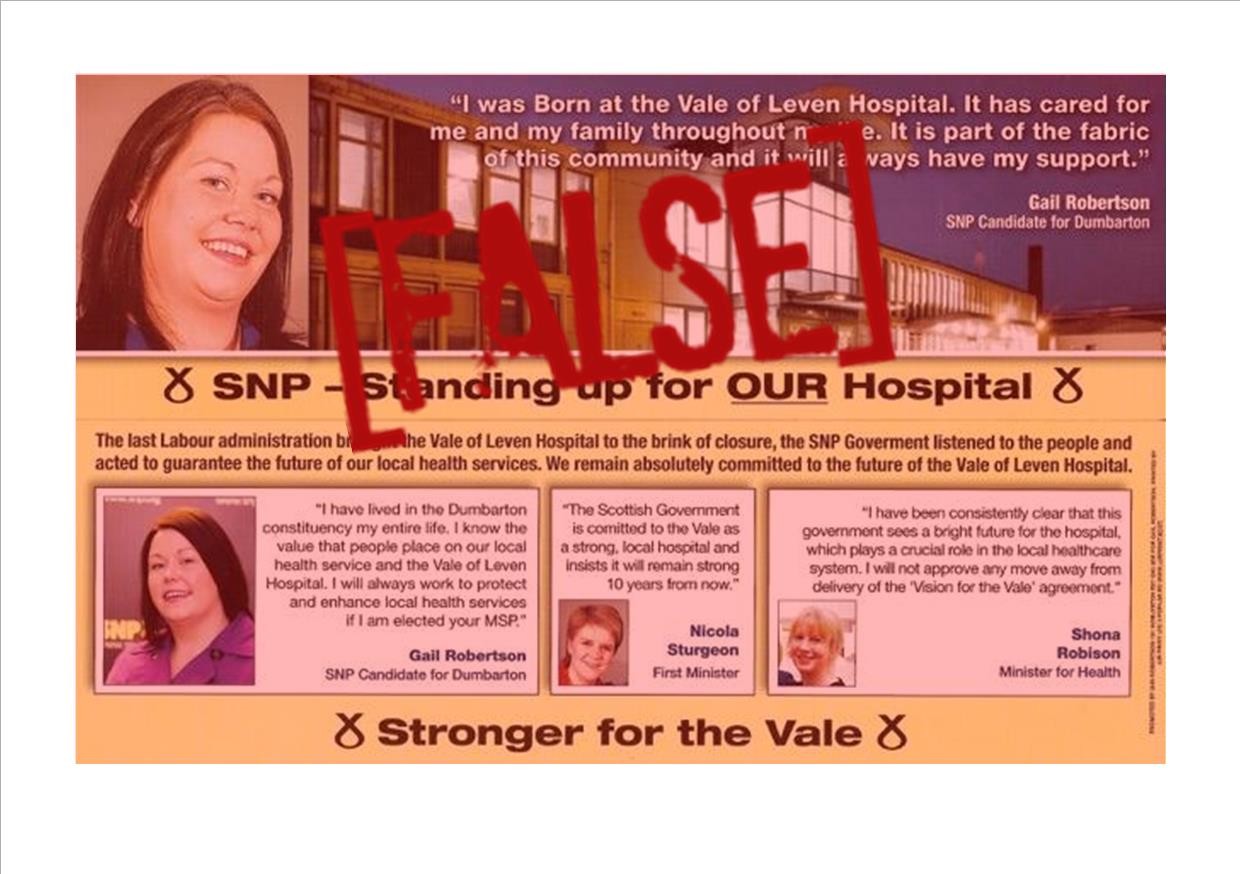 The NHS board formally announced plans to close the birthing unit at Vale of Leven Hospital and transfer the service to the Royal Alexandra Hospital in Paisley or the Queen Elizabeth University Hospital in Glasgow as part of a series proposals aimed at filling the NHS board’s £69 million budget deficit.

The landmark Vision for the Vale agreement signed in 2009 by Nicola Sturgeon when she was Health Secretary promised that maternity services at the Vale of Leven Hospital would be “sustained and promoted” and that a marketing campaign would take place to increase the number of births at the midwife-led unit.

However Jackie Baillie will tell MSPs that a survey conducted by her office found that three quarters of local GPs are not aware of any marketing activity taking place at their practice to encourage women to give birth at the Vale.

Jackie Baillie invited all GP practices in West Dunbartonshire, Helensburgh, Lomond, Bearsden and Milngavie to take part in the survey to test the health board’s assertions that it has done all it can to promote the Vale unit.

Of the 12 responses received by the local MSP so far, one came from a practice in Bearsden and two from practices in Clydebank. The rest of the responses are from GPs based in Dumbarton, Vale of Leven, Helensburgh and Lomond.

Half of the respondents said that they do not routinely offer information on the Vale of Leven Community Maternity Unit to pregnant women following the launch of a centralised booking service for mums-to-be in 2014. Previously, women contacted their local GP as soon as they became pregnant but now they are signposted to a call centre based at the Queen Elizabeth University Hospital in Glasgow.

Scottish Labour MSP Jackie Baillie said the results showed that the promise made in the Vision for the Vale to ‘promote and sustain’ the maternity unit has been broken and called on the SNP Government to intervene to halt the closure plans.

NHS Greater Glasgow and Clyde’s service change proposals also include the closure of the birthing unit at Inverclyde Hospital, rehabilitation wards at Lightburn Hospital, inpatient beds at the Centre for Integrative Care and the transfer of emergency paediatric services from the RAH to the QEUH.

Before the Scottish Parliament elections the SNP accused Labour of scaremongering when it warned about cuts to NHS services and claimed to support the future of local services at the Vale of Leven Hospital. Within a matter of weeks following the elections in May the proposals which Jackie Baillie highlighted prior to the election were then published.

“The health board previously said that local GPs would play a part in promoting the Vale of Leven Hospital’s maternity unit and encouraging women to use our local services. However this survey shows that three quarters of local GPs were not even aware of any marketing activity taking place in their practices at the time of Vision for the Vale. Astonishingly, none of the GPs currently have information leaflets or posters on the walls of their surgeries to promote the Vale unit. This blows a huge hole through the health board’s claims to have actively promoted the services at our local hospital.

“The SNP Government must not sit back and do nothing while the health board rips up the promises made in the Vision for the Vale. We urgently need assurance from the SNP Health Secretary that she will use her powers to save the Vale birthing unit and block the transfer of vital local services to Paisley and Glasgow