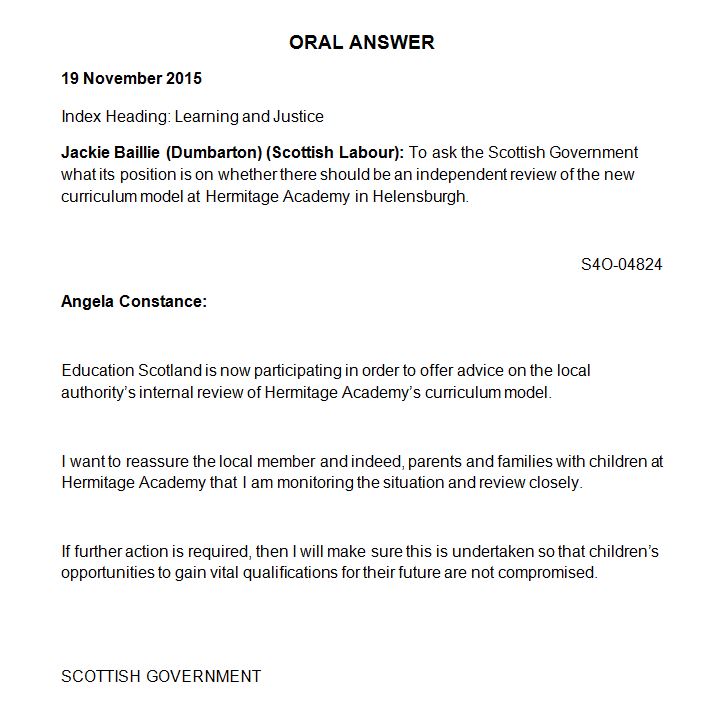 Local MSP Jackie Baillie has welcomed the Scottish Government’s intervention in the row over the controversial new curriculum model at Hermitage Academy.

The Helensburgh and Lomond MSP had called for the Scottish Government to step in following widespread concern among parents at Argyll and Bute Council’s refusal to agree to an independent review of the new exam system. Under the unconventional new system at Hermitage Academy, none of the pupils sit exams in fourth year and spend two years working towards Highers instead. Parents have expressed fears that the system is failing pupils and concerns have been raised locally by teachers’ unions.

Responding to Jackie Baillie’s question lodged at the Scottish Parliament, Education Secretary Angela Constance confirmed that Education Scotland is participating in order to ‘offer advice’ on the Council’s internal review.

“I have been raising the concerns of local teachers, parents and pupils with the Scottish Government as early as 2012 so I am pleased that the Education Secretary has now confirmed the Scottish Government will be involved in the review through its education body. The parents I spoke to were clear that they had no confidence in the Council’s own internal review so I hope that Education Scotland’s involvement in the process will help shine a light on what went so badly wrong with the new exam system at Hermitage Academy.

“The focus now must be on what the Scottish Government and Argyll and Bute Council can do to ensure that current and future pupils will be able to reach their full potential. I know that many parents are demanding the reintroduction of exams in S4 for those pupils who would benefit and I hope that the review will give this serious consideration. The reality is that S4 and S5 pupils are due to sit prelims soon and parents say that they are already behind on much of the coursework. We need action right now before other pupils are let down