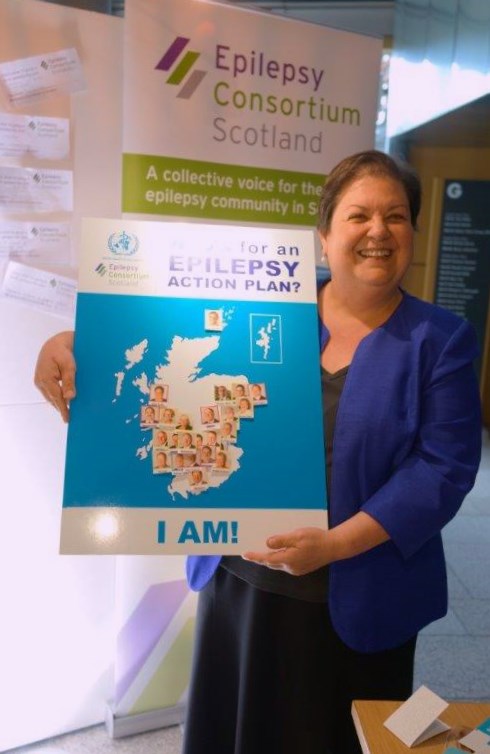 Local MSP Jackie Baillie is promoting National Epilepsy Week (17-23 May) activities in the Scottish Parliament which includes cover signing the published revised SIGN national guideline on managing epilepsy in adults.  Along with fellow MSPs, she was pictured holding up this gold standard guidance cover in a group photo, held by the Epilepsy Consortium Scotland (ECS), following First Minister’s Question Time on Thursday 21 May in the Garden Lobby.

Jackie also pledged her support to a World Health Organisation global resolution, being debated in the United Nations this week, for member states to develop national epilepsy action plans.

“Studies show that while just over half of people with epilepsy have seizure control, seven in ten could become seizure free with optimum care.  The revised SIGN guidance can play a vital part in addressing this treatment gap and improving services over the next decade.  I want the very best health and social care for constituents affected by epilepsy so I was delighted to take part in National Epilepsy Week to help highlight these issues and raise awareness. “

“We are grateful to MSPs and Ministers for drawing attention to epilepsy in so many different ways.   We hope the latest SIGN guidelines they will be welcomed and implemented after their launch on 18 June 2015.  Part of the Consortium’s work has been mapping epilepsy services in Scotland to see where the gaps are. Our findings are going to be a useful tool for agencies when they are planning future provision.  We look forward to sharing information with MSPs this week at the ECS exhibition stand in the Garden Lobby