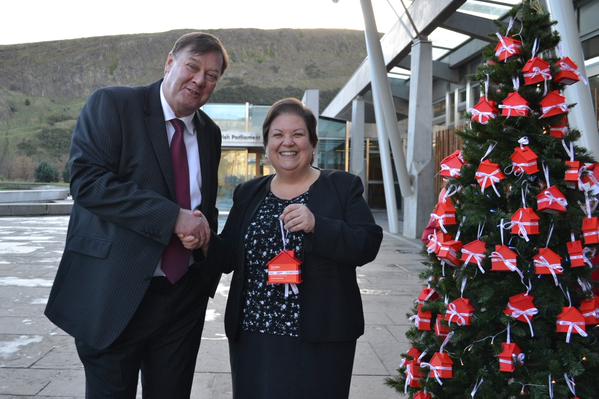 More than 4000 children will be without a home this Christmas and Shelter is calling on the Scottish Government to tackle the chronic shortage of housing in Scotland. The charity said that at least 10,000 new homes need to be built each year to address the problem and begin to reduce social housing waiting lists.

As part of the campaign, MSPs were asked to decorate a Christmas tree outside the Scottish Parliament with little red houses which double up as collection cans for the charity’s fundraising appeal.

“It is an absolute scandal that any child would spend Christmas homeless, but over 4,000 is nothing short of a national disgrace.

“I welcome Shelter’s call for the Scottish Government to build a minimum of 10,000 social houses a year to begin the fight back against homelessness. Last year the government built only 4403 new social houses -; a number which has fallen every year since 2009.

“This cannot continue. Nicola Sturgeon must act now to reverse the cuts to local authority budgets and deliver more social housing where it is needed.”

“It’s completely unacceptable that in the 21st century 4,228 children in Scotland will spend this Christmas homeless – that’s enough to fill the Scottish Parliament chamber 32 times over and equivalent to more than two homeless children for every primary school in Scotland.

“The temporary accommodation they are forced to live in is often poor quality housing where they can spend months or even years waiting for a home of their own.

“We need to see 10,000 new social homes built each year to tackle Scotland’s housing crisis. That way, we can work towards a future where no child has to wake up on Christmas morning, or any other morning, in such awful circumstances.”

To help support Shelter Scotland, people can visit shelterscotland.org or text to SHELTER 70123 and donate £3 to support our work to prevent homelessness and give a child a warm, secure home when they need it – especially at Christmas.